In 2000-2005 Eduard Ilyich studied at the Department of History of the Kazan State Pedagogical University. In 2009 he graduated from the postgraduate school under the Institute of History of the Tatarstan Academy of Sciences with a speciality in Archaeology.

Since 2005 Eduard Ilyich has worked at the National Center for Archaeological Research of the Institute of History named after Sh. Mardzhani of the Tatarstan Academy of Sciences.

In 2014 he became a Research Associate of the Institute of Archaeology named after A.Kh. Khalikov of the Tatarstan Academy of Sciences.

In the period of 2005 – 2017 he participated and headed archaeological studies in the Republic of Tatarstan.

In 2016 within the framework of a youth grant of the Republic of Tatarstan he conducted a study in collaboration with R.N. Khamzin entitled “Arrowheads and Crossbow Bolts of the Middle Volga Region of the 13th-16th Centuries Reflecting the Military Traditions of Eurasia.” 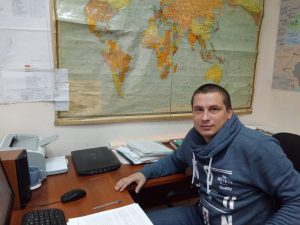