Galimova Madina Shakirovna (September 3, 1958, Ovruch, Ukrainian SSR) – Archaeologist, Candidate of Historical Sciences, Specialist in the Archaeology of the Stone Age of the Volga-Urals. Head of the Primeval Archaeology Department of the Institute of Archaeology named after A.Kh. Khalikov of the Tatarstan Academy of Sciences. Madina Shakirovna graduated from the Faculty of History and Philology of the Kazan State University named after V.I. Ulyanov-Lenin in 1980. For three years she worked as a teacher of history and social studies at an evening shift secondary school in Kazan, and in 1983-1984 headed the archaeology office and museum of archaeology of the Kazan State University. In 1985 she joined the Archaeology and Ethnography Sector of the Institute of Language, Literature and History named after G. Ibragimov of the Kazan Branch of the USSR Academy of Sciences, and in 1986 graduated from the postgraduate school under the supervision of A.Kh. Khalikov. In 1999 Madina Shakirovna defended her Candidate’s thesis “Monuments of the Upper Paleolithic and Mesolithic at the Influx of the Kama River” at the Institute of Archaeology of the Russian Academy of Sciences (Moscow). In 2001 she completed an internship at the experimental and traceological laboratory of the Institute of the History of Material Culture of the Russian Academy of Sciences (St. Petersburg) based on the method of functional and traceological analysis of stone implements. He is the author of over 100 scientific publications, including 1 monograph. Since 1979, she has conducted archaeological excavations at the sites of the Stone and Early Metal Ages, and surveys of sites located in the impact area of Kuibyshev and Nizhnekamsk reservoirs. Socially significant studies of the condition of Tatarstan archaeological monuments were conducted with her participation and under her supervision in 1988-1990, 2005-2008 and 2012-2014. She is one of the leading organizers of interdisciplinary archaeological and natural studies in Tatarstan and in close cooperation with specialists in natural sciences arranges comprehensive studies of monuments dating back to the Stone Age, Bronze Age and Early Iron Age located in the Volga-Kama Region.

Member of the Academic Council of the Institute of Archaeology named after A.Kh. Khalikov of the Tatarstan Academy of Sciences, member of the editorial board of the journal “The Volga River Region Archaeology”.

Academic Interests: primeval archaeology of the Volga-Kama region, paleogeography and paleoecology of the region in the Stone Age, reconstruction of the aspects of the household life of of primeval groups, functional and trace evidence analysis of stone implements.

RFBR grant (2007–2009) “Primitive Man and Natural Environment in the Volga-Kama Region: Methodological Aspects of the Reconstruction of Natural Management and Economic Activity” (Project No. 07-06-00169, project coordinator).

Mesolithic cultures with trapezoids in the basins of the Volga and Dnieper: the issues of origin and historical fates. Scientific report. Kazan: “RITs “Schkola” Publ., 2001, 17 p. 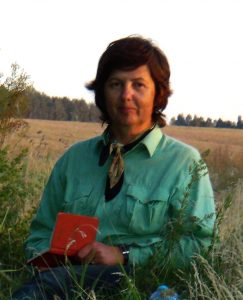