Bugrov Dmitry Gennadievich (July 22, 1966, Kazan) – Archaeologist, Candidate of Historical Sciences, expert in the archaeology of the Final Early Iron Age – Early Middle Ages of the Volga-Ural Region. Senior Research Associate at the Primeval Archaeology Department of the Institute of Archaeology named after A.Kh. Khalikov of the Tatarstan Academy of Sciences. Dmitry Gennadievich graduated from the Faculty of History of the Kazan State University named after V.I. Ulyanov-Lenin in 1991. He worked in the State United Museum of the Republic of Tatarstan (since 2001 – the National Museum of the Republic of Tatarstan) as a research associate, head of sector and senior research associate of the Department of History of the Pre-Soviet Period (since 1992 – the Department of Archaeology and History of the Region) and the Funds Department. In 2000-2003 he headed the newly established Department of Archaeology of the National Museum of the Tatarstan Republic. During the period of his work in the museum, Dmitry Gennadievich participated in the creation of 11 expositions, in 4 of which he was was a project manager. In 2006-2014 he worked at the National Center for Archaeological Research of the Institute of History named after Sh. Mardzhani of the Tatarstan Academy of Sciences as a research associate and senior research associate. In 2001 he graduated from the postgraduate school under the Institute of History named after Sh. Mardzhani of the Tatarstan Academy of Sciences under the academic supervision of P.N. Starostin, and in 2006 he defended a thesis “Monuments of the Pyanobor Culture of the Iksa-Bel Interfluve”. He is the author of more than 60 scientific publications. Starting with the period of studying at the university (since 1988) Dmitry Gennadievich has conducted independent field archaeological research, including salvage and rescue excavations of Sorochiegorsk (1990, excavations 3 and 4), Toiguzinsky II (1995-2000) and Ust-Menzelsky (2007) settlements, Menzelinsky (1998-1999) and Gulyukovsky (2006-2007, 2009, 2012 and 2014) burial mounds. In 2010-2013 he participated in the preparation of a concept and the creation of an exposition of the Museum of Bolgar Civilization (Bolgar).

Academic Interests: archaeological cultures of the Volga-Kama region at the turn of historical periods – the first half of the 1st Millennium A.D.

Matveev R.V. Armament of the population of the Volga-Vyatka interfluve in late 2nd – 4th centuries A.D. Thesis in Support of Candidature for a Degree of a Candidate of Historical Sciences. Specialty 07.00.06 – Archaeology. Kazan, 2013.

Myasnikov N.S. Archaeological sites of the first half of the 1st Millennium A.D. at the Sura-Sviayaga interfluve. Thesis in Support of Candidature for a Degree of a Candidate of Historical Sciences. Specialty 07.00.06 – Archaeology. Izhevsk, 2016.

RFBR grant (2007–2009) “Primitive Man and Natural Environment in the Volga-Kama Region: Methodological Aspects of the Reconstruction of Natural Management and Economic Activity (Project No. 07-06-00169, author). 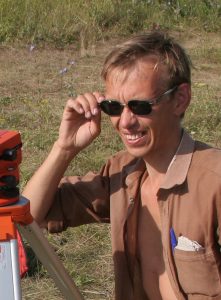