This volume "The Stone Age", which opens the multi-volume academic publication "Archaeology of the Volga-Urals", presents generalized data from long-term studies of Paleolithic, Mesolithic and Neolithic sites of the Middle Volga and the Fore-Urals, including the north-east of the European part
of Russia. These regions, selected as the geographical scope of the volume, are included in the broader territory of the Volga-Urals region. The authors have revealed the regularities of the relationship between man and the natural environment from the glacial epoch up to the climatic optimum of the Holocene (the modern interglacial stage of the Quaternary period). The life support systems of the primeval era collectives have been reconstructed, the processes of genesis and interaction of Paleolithic, Mesolithic and Neolithic stone industries and archaeological cultures have been considered.
Collective scientific work is of interest not only for archaeologists, but also for specialists
in historical and paleo-geographic disciplines, as well as for everyone interested in the ancient history of the Volga region and the Urals. 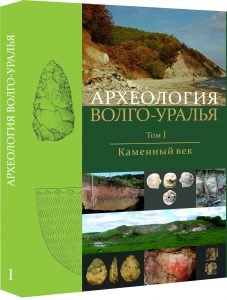