The book is dedicated to the history of a large medieval state located in the territory of contemporary Russia and Kazakhstan - the Nogai Horde, which emerged during the collapse of the Golden Horde in the 15th century and ceased to exist in the first third of the 17th century. It contains a detailed study of the political history of the Nogai state and essays related to the following specific issues: territory, population, economy, culture, and others.

The authors study the relations of the Nogai Horde with neighboring states and peoples, including the Tatar and Central Asian Khanates, the Kazakh Khanate, Turkey and the Caucasus. An individual essay is dedicated to the characteristics of Nogai-Russian relations. The appendix contains genealogical trees of the Mangyt nobility - the ruling clan of the Nogai.

The study was performed on the basis of archival materials, many of which were introduced into scientific discourse for the first time, as well as Eastern and West European sources, Russian chronicles, and other documents. 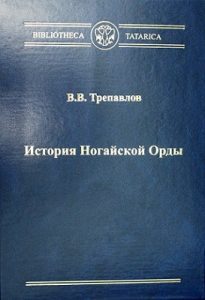