Statuary art is represented by anthropomorphic steles, menhir-shaped idols of the Early Metal period, medieval Turkic (11th-13th century Polovets) statues in the form of steles, three-dimensional sculptures and monumental statues. The entire series of artifacts of archaeological origin has been collected during exploration and excavations carried out since the 1960s in the Steppe Donets region. The book covers the history of searches and discoveries of monumental works of art, the subject characteristics and iconographic features of the local stone-cutting industry, the circumstances of the concentration of sculptures on the Donetsk Ridge, the compositional change of statuary forms in the direction from simplified products to perfect classical post-antique statues.

The issues of petrography, workshops, manufacturing technology and transportation of statuary monoliths are addressed. Special attention is paid to the issues of semantics and sacredness of the Cuman-Kipchaks, the solutions of which have been confirmed by excavations of sacred places and sanctuaries containing preserved sculptures.

The main focus of the work is the searching and subject matter of the dialogue of the peoples of the Eurasian space in the system of cultural genesis of medieval ethnic groups.

The actuality of the primary sources of statuary artifacts of the Indo-European, Iranian-speaking and Turkic-speaking tribes is confirmed by illustrations in the text, and albums where each graphical product is accompanied by informative and reference content.

The book is addressed to archaeologists, culturologists, creative workers, sculptors, artists, local historians, and everyone interested in the history and art of the perished tribes and societies. 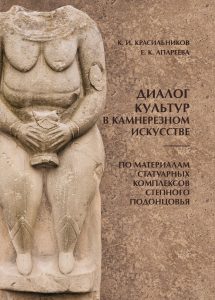