The Karatun hoard of coins discovered in 1986 in Apastovsky District of the Tatarstan Republic is the largest scientifically known hoard of Golden Horde (Juchid) coins. The hoard includes coins of almost all 14th century khans of the Golden Horde, imitations of Golden Horde dirhams, coins of the Iranian Jalairid dynasty, coins of Timur and his khans, several coins of Russian principalities, as well as single coins of the Trapezuntine Empire and Galich Rus.

The book features a description of 2962 coin types illustrated by 24,103 coins. Drawings of over 1600 coins are presented in 74 tables.

The work is intended for scientific and museum workers, numismatists, historians and collectors, as well as for a wide range of readers interested in the history of monetary circulation in Eastern Europe, political and economic history of the Volga region, the Crimea, the Caucasus and other regions of the Golden Horde. 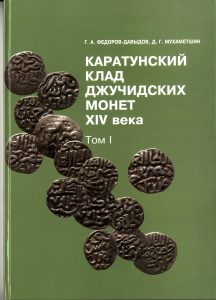