In historical terms, the Sura and Moksha regions were part of Volga Bolgaria in the 10th-13th centuries. This accounts for its similarity to the unified Bolgar armament complex. Meanwhile, the location of the region at the border and certain features of its cultural and linguistic environment, as well as the proximity to the nomadic steppe world and the involvement of Finno-Ugric neighbours in a diplomatic war with Russian principalities, made it to a certain extent different from the general Bolgar armament and military equipment background. A special military and political situation, and direct participation in military events related to Mongol campaigns against Eastern Europe determined the originality of the military affairs of these regions.
The monuments of the Upper Sura and Moksha regions feature an unprecedented number of various 11th-13th century armament, the largest of which is concentrated in a single monument - Zolotarevsky settlement, which is associated with the role it played in the history of the region, Volga Bolgaria and Eastern Europe. It was the site of a decisive battle which ended the Mongol campaign against the Volga Bolgars and the Finno-Ugric peoples of the Middle Volga region. The traces of this battle has provided the scientific world with many details concerning the state of military affairs in the Pre-Mongol period.
An analysis of the entire armament complex suggests that the complex of the south-western Volga Bolgaria possessed a number of characteristic features emphasizing their originality. At the same time, this originality should not be overestimated. The concept of these features was largely accounted for by the presence of an armament complex which was not of local origin. This series of characteristic armament items is of Central Asian origin and found itself in the Sura region as a result of events associated with Mongol campaigns and the conquest of Eastern Europe. This region is the discovery site of not merely individual armament items, generally represented by arrowheads or composite bow parts, but a complete armament complex brought here by the soldiers of Genghis Khan. The uniqueness of the situation is that this complete and impressive complex is the only evidence of the features of the Mongol army’s armament and composition of such representativeness and significance in the entire Eurasia.
Considering the remains of a large number of weapons of Central Asian and Siberian-Far Eastern origin scattered in the vicinity of Zolotarevsky settlement, this area most probably represents the actual battle ground. It is the origin of a significant portion of armament, which is incomparable in terms of the number of findings with any archaeological settlement in Eastern Europe. A similar number of intact and expensive armament, including weapons and equipment with gold decorations could not have accumulated in ordinary conditions. Our case if a unique and complex archaeological phenomenon which can only be explained by a catastrophic outcome causing one party to retreat, losing weapons and equipment, which could have never been lost under normal conditions. This phenomenon only has one explanation - this is the site where Mongolian troops, which included Kyrgyz, Jurchen and Mongol forces, suffered a terrible defeat. However, the winners, having captured the major portion of the trophies, were not able to collect all the armament and equipment scattered across the battlefield. In 1237 Zolotarevsky settlement accommodated the complete military forces of the Upper Sura region with an objective to drive back the Mongol army moving towards Rus. During a fierce battle, the Mongols attacked the fortress using stone-hurling machines and practiced a continuous assault, which is evidenced by a large number of stone shells and tens of thousands of arrowheads. After the seizure of the fortress, many slain soldiers and weapons remained on the ground inside and outside its territory, which made it possible to reconstruct the armament complexes of both the attackers and the defenders. After the desolation of the remaining settlements in the Upper Sura and Moksha regions, the Mongol army headed towards the Ryazan Principality. 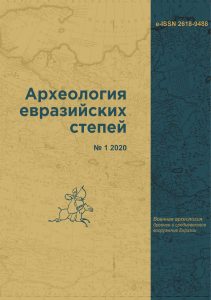